The 1862 Dakota War is often called Minnesota’s Other Civil War. Most people have never heard of it and that includes a lot of Minnesotans.  Fought in the same time period as the Civil War battles of Second Manassas and Antietam in that horrific late summer of 1862, it couldn’t have come at a worse time for the Union and Abraham Lincoln.  They tried to stay out of it but couldn’t.  It was too big and too damaging.

It was the largest Indian war in American history.  The main battleground was the entire Minnesota River Valley in southern and central Minnesota – 20% of the state’s total land area. The uprising spread into the Dakota Territories and sent panic into Nebraska, Iowa and Wisconsin. 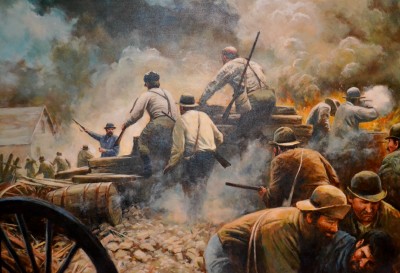 An artist’s realistic portrayal of the decisive action of the Second Battle of New Ulm. As the Dakota were closing in for the kill, the defenders leaped over their own barricades and counterattacked. After pushing the Indians back, the defenders set fire to 40 buildings to deny their use to the enemy. Those two desperate actions saved the people of New Ulm but destroyed much of the town.

In Minnesota, Indians did mass attacks on a fort and an entire town – both twice.  Contrary to what folklore and Hollywood tell us, this was almost unheard of in any of the Indian campaigns.

When the fighting ended, 500 settlers and 100 soldiers were dead.  Over 200 people were killed the first morning – as many as Custer lost at the Little Bighorn. To this day, that number of civilians killed on American soil as a result of hostile action is exceeded only by the attacks on 9/11.

Disease and battle wounds killed unknown numbers after the battlefields were silent. Refugees numbered in the thousands. The war de-populated and ravaged a large part of the state, which took years to recover.

The number of Indians slain in battle has never been confirmed but we do know that hundreds died in the retribution that followed.  That number includes 38 in the gallows – at the same time. It’s the largest mass execution in U.S. history.  As further retaliation, the Dakota (Sioux) way of life was intentionally destroyed forever.

The fighting was close and ferocious.  In both battles at New Ulm, outnumbered farmers, settlers and shop keepers fought house to house, launched desperate counterattacks and burned down much of their own town to hold off the Dakota braves assaulting them from every direction. 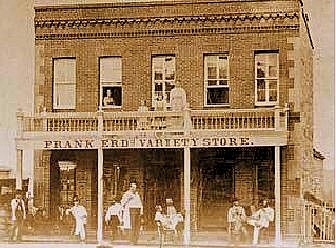 The Frank Erd dry goods store was one of only three brick buildings in the New Ulm defensive perimeter. Many women and children took cover here during the fighting. The women decided that if the town fell, they were not going to be taken and face a hideous death at the hands of the Indians. They had a barrel of gunpowder rolled into their basement shelter. If the Dakota came, the last act of the defenders of New Ulm would be to blow up themselves and as many Indians as possible. Fortunately, it never came to that.

This was one of the few engagements throughout all the Indian Wars of the 19th century where artillery could be brought to bear and used effectively.  It was used extensively against the Dakota and saved the day in several actions.  At Fort Ridgely, the Dakota attackers ran into a storm of fire and lead the likes of which they had never seen.

For over 100 years, the people of Minnesota celebrated the Dakota War as a victory of pure good over pure evil, i.e., the settlers defeating the treacherous blood thirsty savages.  It was called the Sioux Massacre. That view has changed in recent years,  especially with the commemoration of the 150th anniversary of the conflict in 2012.  As it turns out, there was enough blame and blood to go around for everyone.

Regardless of what one thinks about the Indians and the whites, there’s no denying that what happened in New Ulm, Minnesota on August 19 – 23, 1862 was extraordinary. Regular people banded together, fortified their town and fought tooth and nail against an implacable enemy – and won despite being outnumbered and outgunned.  I can find no other instance in U.S. history of a similar event.  There are many instances of people hunkering down in forts, but none like this. The Battles of New Ulm stand as singular events in American history.

And before I forget…there’s lots of geocaches in New Ulm and throughout the Minnesota River Valley.  History, geocaches, German food – what more could you want?

Here’s your link to our web site which has a full history of the Dakota War.

That’s all for now … Boris and Natasha