Down in Alabama at the intersection of the Foley Beach Expressway and Alabama 98 in Baldwin County is a little town called Elberta.  About a half mile east of the intersection is a diner called the Roadkill Cafe.  Their motto is “You kill it, we grill it.” We were out geocaching in the vicinity one day and ran across it.  Well, with a name like that, how could we resist?

This is definitely a locals place.  Everybody who comes in and out seems to know everyone else. We were the only outsiders but were welcomed warmly.  Everybody was real nice.  The menu is on the chalkboard by the door and all the food is laid out buffet style, including salad and dessert.  For eight bucks, you get it all and as much as you want except your drinks.

This is real home-style Southern cooking.  I had chicken fried steak, red beans and rice and cornbread.  Natasha had fried chicken and mashed potatoes with lemon cake for dessert.  It was all good stuff.  We could have easily gone back for seconds and thirds but resisted the temptation.  Most of the people there did not.

This is the kind of fine dining we look for on our adventures.  There are over a dozen geocaches within a short drive so you can roadkill a couple of birds with one stone.  If you want to eat here, you’ll have to time it right. They are only open Monday – Friday from 10:30 AM to 12:30 PM although locals were streaming in after the closed sign went up.  Maybe they stay open until the food runs out. 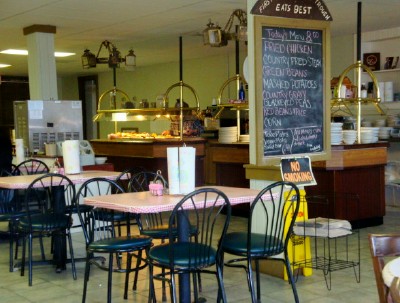 Inside the Roadkill. Clean and simple. Menu on the chalkboard. Eight dollar buffet in the middle. This was taken about 10 minutes after closing. Before that, all the tables were full. There were still some locals wandering in after this was taken.

So forget your diet for a day and check out the Roadkill Cafe. Don’t pay no never mind to the Subway next door.