This is the chapel of the Misión San José de Tumacácori. Franciscan missionaries began construction in 1811 although no services were held here until 1822. Even though it was still a work in progress after 11 years, it was a magnificent structure. It represented the zenith of a Catholic mission community that stretched back to 1691. In that year, Father Francisco Kino arrived at a Pima Indian village on the banks of the Santa Cruz River. His ministry was to advance Spanish influence and spread Catholic teachings into New Spain, an area that encompassed the entire present-day southwestern United States on up to the San Francisco Bay. The name of the Pima village in their native language is lost to history. The Spanish phonetic version of it became Tumacácori (too-mah-ká-ko-ree). 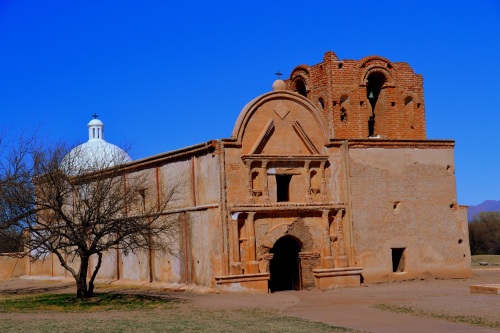 The chapel design is very interesting from a cultural standpoint. It strongly reflects a style brought to Spain by the Moors, who established an Islamic kingdom on the Iberian Peninsula that lasted 700 years (roughly 750 A.D. to 1490 A.D.). The pointed window niches in the front, the distinctive arches in the bell tower and the white domed roof above the altar are right out of Islamic architecture. The faux columns on the front and cutouts in the walls for statues and icons were usd by the Romans. On the other hand, it was brightly painted and decorated both inside and out, reflecting Mexican and Native American cultures. Everything in the picture is original construction. Even some of the original paint can still be seen today.

For the first 70 years of its existence, the mission had no church. All services were conducted among the people, often by visiting priests. Father Kino ministered to his flock until his death in 1711. The first real church was built in 1757. The outline of its foundation is nearby. Tumacácori carried on through good times and bad until 1848, when it was abandoned for good – a casualty of the Mexican War and Apache raids. The magnificent chapel, which had been under constant construction since 1811, was never finished. In 1853, the entire area became part of the United States after the Gadsen Purchase transferred most of New Spain to American hands. In 1908, President Teddy Roosevelt established the thoroughly dilapidated mission as a National Monument and began preservation efforts. It became a National Historic Park in 1990, incorporating all the missions and presdios in the I-19 corridor. 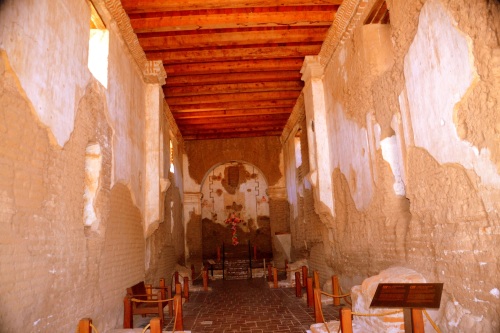 The main sanctuary inside the chapel. The layers of white limestone, mud and adobe brick used in the construction are clearly visible. You can also see some of the original paint on the far back wall of the altar. There were no pews. People stood or knelt for the service, which was in Latin and sung by the priest and choir like Gregorian chants. Most of what’s in here is original construction, although the roof was rebuilt by the Park Service. Their charter is to preserve the ruins, not restore them.

On a fairly regular basis, we stumble into things and places that we’ve never heard of and come away saying “wow!” This is one of those places. We came here on a Saturday road trip looking for a geocache and ended up spending half the afternoon. The Tumacácori National Historic Park is located just off I-19 about 20 miles north of Nogales, AZ. You can also visit the nearby Tubac Presidio State Historical Park or do some hiking on the Juan Bautista de Anza National Historic Trail. We’ll be doing both and will let you know what we find. 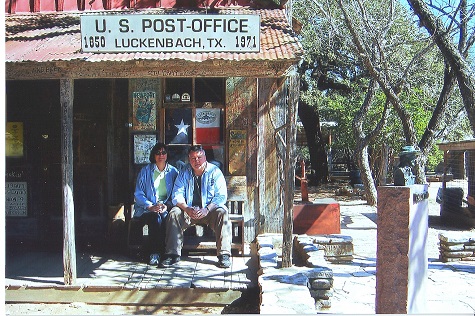